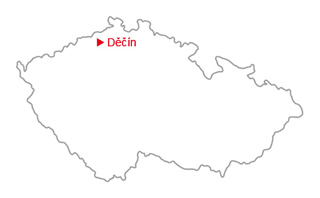 The central source of heat (CZT) for the right bank of the city of Děčín is a unique project, the largest geothermal water installation in the Czech Republic.

A test well was drilled in 1998 and the source was put into operation in September 2002.

For the production of heat TERMO Děčín a.s. started using geothermal energy from water in an underground lake located under the city with a temperature of approximately 30°C. Geothermal water springs forth under natural pressure from a well 545m deep. The heating potential of this water is extracted by heat pumps to warm up heating water to as much as 72°C. At maximum output the yield of the well is 54 litres per second.

The heating technology is complemented with additional thermal sources, namely gas cogeneration engines to generate electricity and heat, and gas-powered hot-water boilers used to cover the peak thermal output of the heating plant.

This new CZT solution in Děčín improves the environment in the city as well as in the Labské Pískovce Natural Preserve and in the nearby České Švýcarsko National Park.

In 2012, in a poll organized by the Association of District Heating of the Czech Republic which involved specialist journalists, the geothermal heating plant in Děčín was awarded the title PROJECT OF THE DECADE and in the category of energy specialists it took second place.