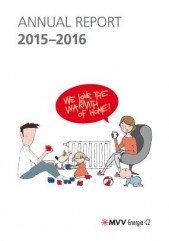 Contrary to the situation in the energy sector, MVV Energie CZ Group achieved stable results. Its turnover in the financial year 2015–2016 was CZK 2.1 billion. It also became the first heating company to offer its customers a comprehensive loyalty program. Thanks to the successful implementation of this, it strengthened its position on the Czech energy market. At the same time the Group is preparing two major investment projects worth hundreds of millions.

„The most significant change is our new loyalty program, which has been a great success with customers," says Jiří Koptík, Chairman of the Board of Directors of MVV Energie CZ a.s. The Group has implemented its loyalty program in several cities. Customers have a better deal thanks to their long-term contracts. Certainty in the form of multi-annual heat consumption enables the Group to develop better the central heating system in the regions where it operates. „Following the confidence expressed in us by our customers, preparations have begun for major modernization projects in Liberec and Pelhřimov," adds Jiří Koptík.

The financial Group's result was affected by another mild winter and decrease in prices in the electricity market. „The slight annual decline in sales was largely compensated by favorable central fuel purchasing and a number of measures for operational savings. We have thus achieved financial results which correspond to our projections ," says Libor Žížala, Member of the Board of Directors responsible for finance.

The financial results of MVV Energie CZ Group, an interview with the Chairman of the Board of Directors Jiří Koptík, and the major events of the year, can be found in the Annual Report 2015–2016.

Annual Reports are available on our website under Financial results.