An ambitious plan to reduce the current one fifth share of coal in heat and electricity production by 2030 was recently presented by the energy group MVV Energie CZ. This happened on the occasion of the 20th anniversary of the joining of its strategic partner – MVV Energie AG, a city company based in Mannheim, Germany.
The ceremonial event, which took place on 13 November in Prague's Mánes, was attended by less than a hundred guests. The meeting included representatives of the German parent company, members of the Czech management of the group, representatives of subsidiaries and partners, and representatives of cities or housing cooperatives who are also shareholders in joint ventures with MVV.

The group, which is among the five largest thermal energy suppliers in the Czech Republic, supplies nearly 700 GWh of heat annually to approximately 70,000 households, as well as industrial customers and municipalities in northern Bohemia, Moravia and the Vysočina region.

In his welcome speech, with regard to the energy market, Jörg Lüdorf, Chairman of the Board of Directors of MVV Energie CZ a.s., devoted time to the decarbonization strategy and investment in lowering impacts on the environment. The Group has so far invested over CZK 2 billion in the modernization and greening of energy facilities in the Czech Republic.

The described trend was also confirmed by the shareholder of the Group – MVV Energie AG. „In Mannheim 10 years ago, nobody could imagine that today we would be offering decentralized energy solutions with packages of photovoltaic systems, storage solutions, charging stations and even an electric car at a flat rate! We plan, build and operate wind turbines and data centers around the world. We offer municipalities integrated 'smart city concepts'. Why not in the Czech Republic in the future?", said Ralf Klöpfer, Chairman of the Supervisory Board of MVV Energie CZ a.s.

In the MVV Group, climate-neutral energy sources based on municipal waste, geothermal energy and biomass already account for almost 30% of the fuel mix. Half of this comes from natural gas.

Energy produced in an environmentally friendly or climate-neutral way will play an increasingly important role in the Group's supply. The aim is to eliminate coal from the energy fuel base by 2030.

„By 2030, at our remaining coal sites, we plan to move to more environmentally friendly solutions. Especially in the field of waste-to-energy recovery and biogas, we see great opportunities, thanks to MVV Group's know-how, to provide environmentally friendly 'green' and at the same time cost-saving CO2 neutral district heating," says Jörg Lüdorf, who – during the 20th Anniversary celebration – thanked Group's employees for their cooperation and reliable energy supply to customers 365 days a year. 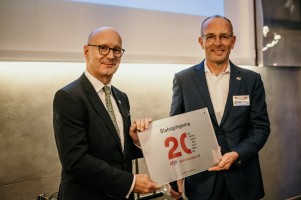 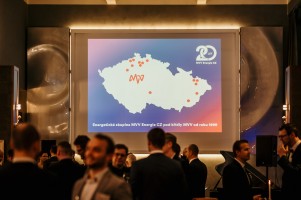 The energy group MVV Energie CZ comprises fifteen companies operating in fifteen cities in the Czech Republic. The Group’s parent company is MVV Energie CZ a.s., which was established in October 1993. Since 1999 the company has been a subsidiary of MVV Energie AG, a German energy group, based in Mannheim, Germany. The three main pillars of the MVV strategy are the production and distribution of thermal energy, the combined high-efficiency power production and the utilization of waste for energy
generation.