Domovská stránka > Tiskové centrum > Aktuality > In Litoměřice, another step away from coal

In Litoměřice, another step away from coal

Replacing coal in the fuel mix is a medium-term goal of ENERGIE Holding, which supplies heat and hot water to thousands of households in Litoměřice, as well as a municipal hospital and a number of other institutions. From the end of June, the fulfillment of this vision will be closer. As part of the modernization of heat sources, the new gas boiler room with an exchanger station in Havlíčková Street has been equipped with a top-notch, gas hot water boiler Bosch UNIMAT UT-M 34 × 16, supplied by the manufacturer Bosch Termotechnika s.r.o. in cooperation with the assembly partner OL Energy s.r.o. This boiler has a minimum efficiency of 95.5%, with low noise, a unique minimization of flue gas emissions, and connection to the central heat supply system.

The new technological equipment has already undergone a trial operation and will serve as a source for covering daily peaks, and also as a backup source for the existing heating plant. "This is a significant investment that is part of the future energy mix, which includes, in addition to other energy sources, a local geothermal source. In this respect, Litoměřice is a prime example for many other cities and regions," says Libor Hrnčiřík, Vice Chairman of the Board of Directors of ENERGIE Holding, which belongs to the MVV group.

Alongside Mr. Hrnčiřík (in the photo, right), the ceremonial handover of the modernized boiler was attended by (from left to right): the 1st deputy mayor of the City Litoměřice Karel Krejza, Chairman of the Board of Directors of ENERGIE Holding Libor Štěpán, Sales Director and Procurator of Bosch Termotechnika Václav Klein, CEO of OL ENERGY Ondrej Lieskovský, and Director of Strategy MVV Energie CZ Branislav Posuch. 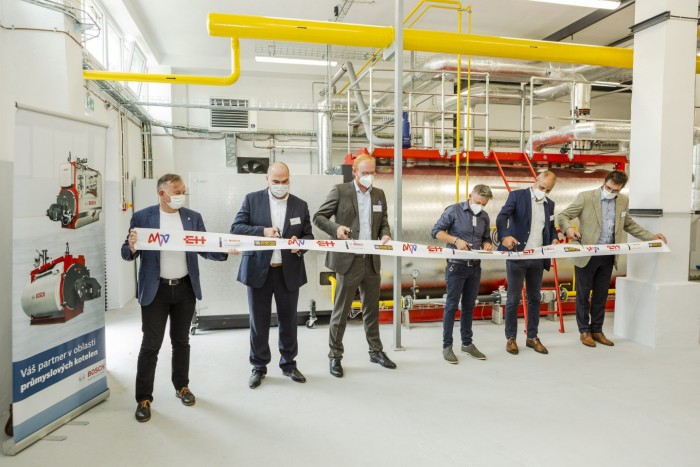